Taking care of the Rusties

Aunt Fanny is a supporting character in Robots. She is voiced by Jennifer Coolidge.

Due to the word "Fanny" having a meaning deemed inappropriate for children in British English, in the UK her name is Aunt Fan, both in the movie and the portable console version of Robots.

Aunt Fanny is a large, red (or occasionally pink) and white colored, snail-like robot with dark blue eyes. Her most notable feature is her enormous backside, which resembles a snail's shell. It is held up by a single wheel and can be used to store things, or even other robots. Her front end is much smaller than her rear; and sports arms and legs just like all the other robots. She wears a very large hat-like object on her head, which is adorned with numerous decorations.

Aunt Fanny is a kindly, generous, motherly figure toward broken "outmode" robots. She took in Fender Pinwheeler, Piper Pinwheeler, Crank, Lug, and Diesel when they had nowhere else to go, allowing them to stay in her boarding house, making them her possible adoptive sons and daughter or nephews and niece. She instantly takes a liking to Rodney, and comes to say goodbye to him when he wants to return to Rivet Town. She is known for being "a little artsy fartsy," a reference to how prone she is to farting. In a contest among the "Rusties", where in they made fart noises with their arms, she revealed her gassiness by actually farting, killing a nearby streetlamp (who was seemingly then taken away to the chop shop). Aunt Fanny also has a sentimental crush on Bigweld. She seems to be a pacifist, as she states at one point in the movie, "fighting never solves anything." However, this could be false because in the final fight scene, she is shown knocking Madame Gasket's henchmen aside with her rear end which she used as a weapon. At the end of the film, she is shown dancing with Bigweld in Rivet Town. 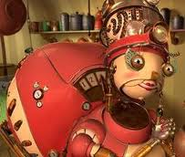 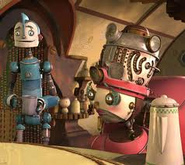 When asked why she's called 'Aunt Fanny,' Fender jokingly responds by saying it's because they shouldn't call her 'Aunt Booty'.