Alive
Cappy is the love interest of Rodney Copperbottom from the movie Robots. She is voiced by Halle Berry.

Cappy is a member of the Bigweld Industries board, someone who still clings to the company's original values of innovation, filling needs, and shining no matter what you're made of. After Rachet takes over the company, Cappy becomes uncomfortable with his wicked plans to force common robots to buy upgrades through cutting production of spare parts. Eventually she finds an opportunity to defect from Rachet and assists Rodney and Bigweld as they try to take down the Chop Shop and reclaim Bigweld Industries.

Cappy is a beautiful and slender robot with medium-length black hair and emerald-green eyes. Like Ratchet, she is covered in upgrades which give her a polished appearance. Her "hair" can be worn plain or in a bun. She usually wears black or silver "clothes" to match her silver skin tone. In her feet she hides a pair of golden inline skate-like wheels, which she can project at will.

Cappy is a calm, but also strong-willed and clever co-executive at Bigweld Industries. Although she is not nearly as outgoing and vigorous as Piper, she is also not willing to conform to Ratchet's agenda and cannot be intimidated by him like her other co-workers. She is one of the more level-headed and reasonable characters in the movie, and sympathizes with the robots who have been "outmoded" because of the changes Ratchet made to Bigweld Industries. Despite this, Cappy still does nothing to attempt to find Bigweld or solve the mystery of his disappearance. Rather, she passively pretends not to mind the changes Ratchet makes. However, she also does not respond to his constant flirting, and chooses to ignore it. She dislikes Ratchet because of his arrogance and snide attitude toward other robots.

When she first meets Rodney, she takes an instant liking to him because of his enthusiasm for being an inventor and his wish to meet Bigweld. When their paths cross again at the Bigweld Ball, she is once again shown to admire him when he speaks up and loudly questions Ratchet on where Bigweld is. However, this time she tries to protect him from Ratchet's wrath, even going as far as pretending to flirt with Ratchet so she can help Rodney escape. She also helps Rodney get to Bigweld's mansion, where the two meet him in person. After this experience, Cappy faithfully assists Rodney for the rest of the movie and openly opposes Ratchet in order to stick with him. At the victory celebration in Rivet Town, the two are shown dancing with each other and then embrace warmly. It can be assumed that they are now boyfriend and girlfriend. 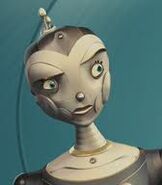 Cappy is disgusted by Ratchet's flirting

Cappy next to Ratchet

Cappy showing Rodney's appearance on a newspaper to Rodney 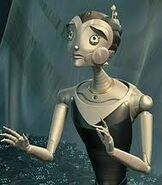 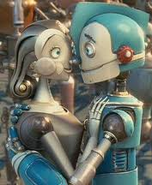 Cappy embraces Rodney at the end of the movie
Community content is available under CC-BY-SA unless otherwise noted.
Advertisement