Harland Williams
Lug is a character in the film, and a friend to Rodney. He lives in Robot City, and has helped Rodney defeat Ratchet and Madame Gasket at The Chop Shop, along with Fender, Piper, Crank, Aunt Fanny, Bigweld, Wonderbot and Diesel.

Lug is a green, boxy, bulky robot. He can make a beat by pounding on his own chest. As suggested by his size, he is very strong. In the movie, Lug complains that he can never find spare parts in his size. During the final fight, he is "upgraded" to look like a professional wrestler.

From the few lines he has in the movie, it can be inferred that he is the "strong and silent" type. He is friendly to Rodney when he first meets the gang, and he often helps Diesel by finding new voice boxes for him. Lug lives with Aunt Fanny, Fender, Piper, Crank, and Diesel at the boarding house. 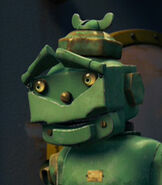 An upgraded Lug, ready for battle with the other rusties
Community content is available under CC-BY-SA unless otherwise noted.
Advertisement