Jim Broadbent
Madame Gasket is one of the two main antagonists (above Phineas T. Ratchet) of Robots. She was Rodney's arch-nemesis, Ratchet's mother and Bigweld's arch-rival. She is voiced by Jim Broadbent. 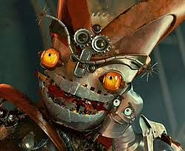