Piper Pinwheeler is a major protagonist from Robots. She is voiced by Amanda Bynes.

Piper is an attractive, bright yellow teenage robot with large round eyes, a sphere-shaped head and face, and brown "hair". Attached to the sides of her head is a pair of pigtail-like objects that can extend to unspecified lengths at will, doubling as a pair of semi-projectile weapons, and proving to be rather beneficial in battle. She could also use it to play music which has a bass guitar tune as she shows her springs.

Piper is a fiesty, sassy, smart-mouthed, and free-spirited tomboy with an obvious interest in boys, and independent personality. Although she appears to be tough and intimidating at first glance, Piper is very loyal and a comforting friend with a big heart. She never fails to stand up for her friends and always speaks her mind. Although she is constantly bickering with Fender, the older brother she never knew she had, she is willing to stand up for him as well. When Piper first meets Rodney, she berates him, believing him to be responsible for Fender's head getting knocked off. She later yells at Jack Hammer when he cannot provide the proper parts to fix her brother's neck. Despite her scrappy, tomboyish attitude, Piper is thought of by Fender and the rest of their friends as the kid of the group who cannot take care of herself. This annoys her greatly, and she proves them wrong in the film's climax by rallying the numerous robots that Rodney fixed to help defeat Ratchet and Madame Gasket.

Piper also seems to have a romantic interest in Rodney. Shortly after meeting him, she scolds him in order to stand up for Fender, but stops herself in mid-sentence and comments that he is cute. Later in the movie, after she sees Cappy with Rodney, she indignantly blurts "Who the heck is she?", hinting that she might be jealous. However, she doesn't seem to hold any animosity towards Cappy because of this, and is not shown to be angry or jealous when she dances with Rodney at the victory celebration in Rivet Town.

Piper finds the Wonderbot, after it was discarded by Ratchet

Meeting Rodney for the first time 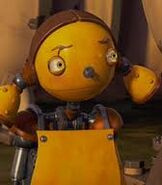 A cropped movie shot of Piper.

Piper applying makeup on herself inside her room

Piper riding along with three other robots.