Rivet Town is a location seen in Robots. It is the hometown of Rodney, Herb, and Lydia Copperbottom. The movie starts and ends in Rivet Town.

Rivet Town is a small, slow-paced and peaceful society. Most of the robots who live there are what Ratchet would consider "outmodes", as none of them have fancy upgrades. The town's name is displayed on a watertower overlooking the city.

Rodney grew up in Rivet Town, but decides to leave so he can meet his hero, Bigweld, in Robot City. However, at the end of the movie, Rodney returns to visit his parents and tell them about his accomplishments. The final celebration takes place in Rivet Town, with its citizens coming out to congratulate Rodney.

After successfully returning Bigweld to his rightful place at Bigweld Industries, Rodney returns home along with all his new friends. The town's citizens throw a party to congratulate him, and Bigweld supplies Herb with enough spare parts to repair himself. Bigweld also tells Herb and Lydia how proud they should be of their son, and Rodney presents his father with an unknown instrument so he can fulfill his dream of being a musician. Herb plays the instrument badly at first, but soon gets the hang of it and plays a song which all the other characters dance happily to. In a final scene, the Wonderbot throws Tim out of the party as revenge for his actions toward Rodney earlier in the movie. 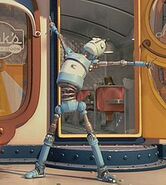 A parade held in Rivet Town, featuring a Bigweld float

A young Rodney, working on the Wonderbot in kitchen of his house

Rodney and his parents at the train station

Another view of the train station

Rodney returns and introduces Bigweld to his parents

A talking fire hydrant, one of the many citizens of Rivet Town 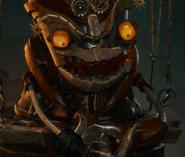 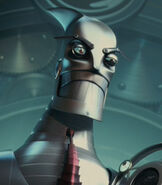 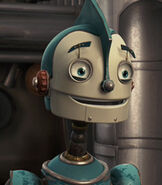