The Sweepers are vehicles used by Madame Gasket and Ratchet to collect discarded scrap metal (and sometimes, "outmoded" robots who are still alive) to bring to the Chop Shop. They appear in Robots as the teritary antagonists.

Regular sweepers are the most commonly seen. They are large, light blue and red-colored vehicles with one large eye and a funnel on top which spews out smoke. They have two large, rotating brushes in the front which suck up scrap, similar to vacuum cleaners. They can also open up their large mouths with sharp teeth to catch outmodes who are still alive (an example would be when one captured Fender). These sweepers roam the streets in the rustier, older parts of Robot City, where the middle and lower-class robots who cannot afford Upgrades live.

Super Sweepers: These sweepers were designed by Ratchet, with the purpose of capturing and killing outmodes in mind. They loosely resemble the regular sweepers, with the exception that they are much bigger, shinier, and have a fin on top. Additionally, in the toy version, they also possess two large claws. Their mouths with sharp teeth contain a wide assortment of cutting tools such as saws, used to more efficiently kill outmodes. These sweepers never made it onto the streets of Robot City, as Rodney Copperbottom and Bigweld halted them by knocking them over like dominos before they could leave the Chop Shop during the film's final battle. 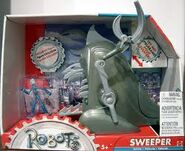 A toy version of the super sweeper